Kapitulska Ulica: Bratislava’s history as told by its oldest street 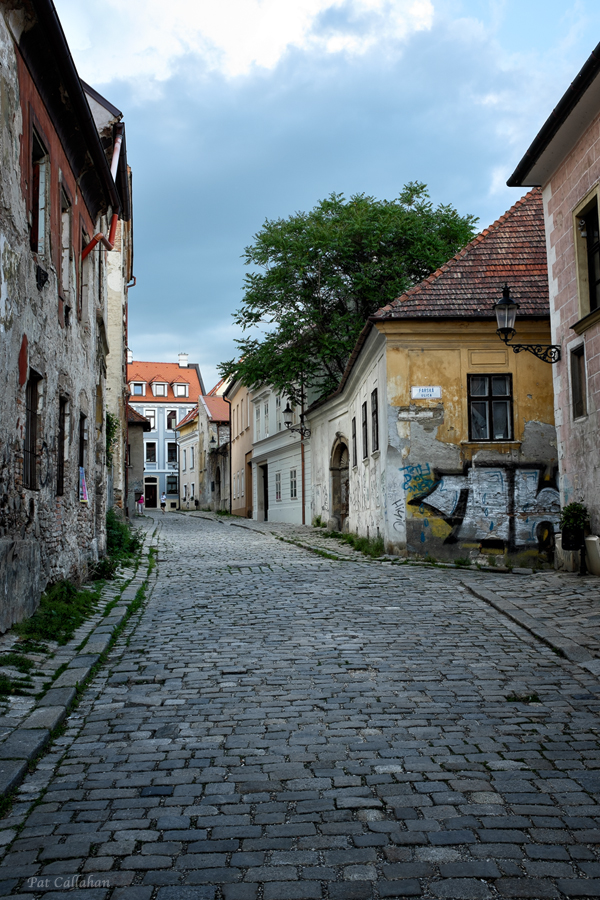 The communists were terrible landlords. In a relatively brief 40 years, they turned Kapitulska Ulica, “Church Street”, from a coronation pathway for the kings and queens of the Kingdom of Hungary into a ramshackle mess of crumbling buildings and cockeyed wooden doors dangling from broken iron hinges. Each time I come here, it breaks my heart. Yet I love this street.

Early one morning, I met an elderly man walking his dog along Kapitulska. He and I tried to converse; struggling, and ultimately failing, to meld German, Slovak and English into a single, decipherable conversation. We augmented our speech with gestures until we eventually gave up. As we parted, I told him very slowly, “I live here.” I pointed down towards my feet, “Here, in Bratislava.” ” He touched his heart, “Welcome.”

As an American living in Bratislava, I seek out the oldest corners of the city. Anything predating the 19th century is ancient to me. Records of Kapitulska Ulica date to the early 13th century. St. Martin’s Cathedral, the anchor of the street, was consecrated in 1452. Beneath these 500 year old buildings are 14th century domed, brick wine cellars; archeological evidence of a millennium of wine making tradition in the small Carpathian foothills.

The history of this street is obvious, inescapable. I see it and smell it. A glimpse of a life under communism. I begin to understand the magnitude of the impact on this city. Kapitulska is my history teacher. 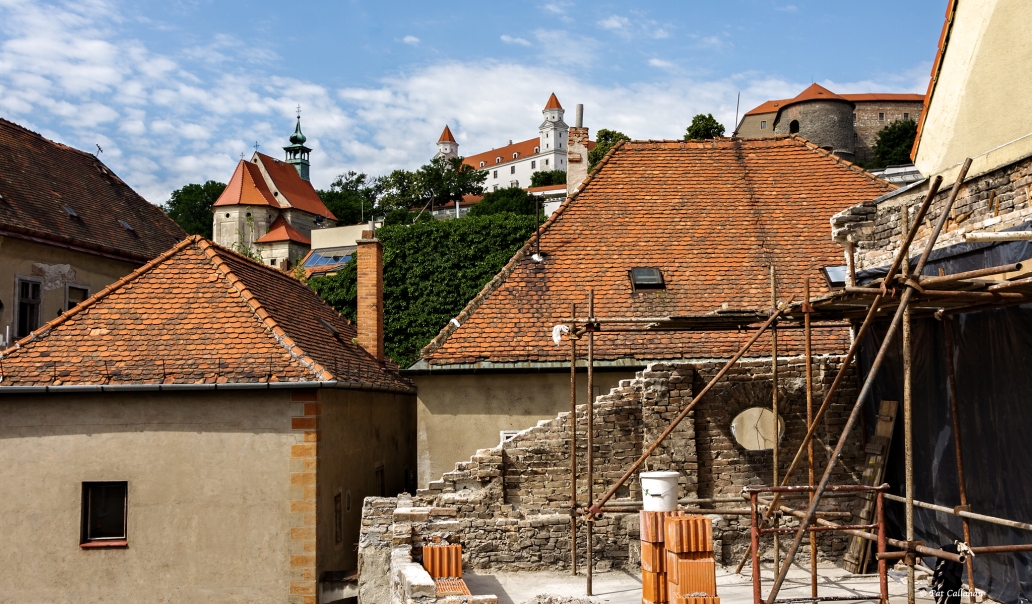 From 1563 through 1830, as a result of the Ottoman siege and occupation of Budapest, the coronation ceremonies of the kings and queens of Kingdom of Hungary relocated to Bratislava. Eleven monarchs and eight consorts walked Kapitulska to their coronation, including Maria Teresa of Austria. The crown on the pinnacle of St. Martin’s steeple signifies its designation as one of a handful of coronation churches in the empire. 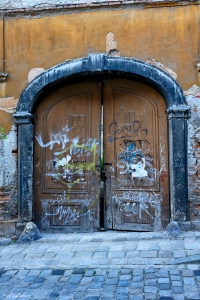 The empire days were golden, but fast forward to the 20th century and the story changes. World War Two and the subsequent rise of communism decimated Eastern Europe. When I ask friends to describe Bratislava, they invariably answer, “Gray. Everything was just completely and totally gray.”

The communists seized all church property, though not the churches themselves, including all the buildings on Kapitulska. They demolished the neighboring Jewish quarter to construct a highway and in the process, cut off the route up to the castle. This previously central and important corridor became an isolated, dilapidated corner of the city.

Today, the buildings are once again owned by Saint Martin’s Cathedral. Neither the church, nor the government, can afford the massive renovations. The onus of restoring these buildings rests with organizations formed by individual groups with a variety of church sanctioned interests. The church agreed to long term leases. In exchange, the organization promised to complete the renovation in a designated time frame and to act as a building steward in the future.

Twenty five years after the fall of communism, interest to restore this section of the city is starting to percolate. It’s slow going, working with the requirements of the state and the demands of the government given these buildings are historically significant and therefore protected. 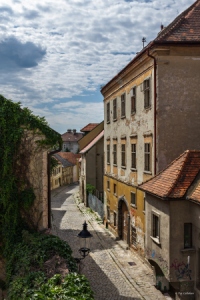 Looking down Kapitulska from the top of the Albrecht House

May 1st, Labor Day in Europe, some of the courtyards on this street opened to the public. No one expected throngs of visitors, yet thousands of people turned out – a hopeful omen and an indication of a budding interest in Kapitulska..

In the last building, in the farthest reaches from the cathedral, lived Alexander Albrecht, the music director of Saint Martin’s and an accomplished composer. Given Alexander’s position with the church, he was granted a home as part of his compensation.

Upon Alexander’s death, his son, Hans, a music professor, lived in the home. Together, through some of the darkest decades in Bratislava’s history, they fostered a communal spirit by maintaining an open house, an evening gathering place for any and all musicians and artists. During communism, in this corner of the city, music wafted through the windows and mingled with the sounds of city life.

Igor Valentovič heads the Albrecht Forum; a group of individuals working to restore the home of Alexander Albrecht to its former role as as a musicians’ gathering place. Through the forum’s efforts, the Albrecht home is being restored with the completion of a new roof; irrigation improvements; foundation repairs and stabilized walls.

Further deterioration has been halted, yet the project must raise substantial additional funds to realize their vision. The projected restoration costs of this one building are estimated at 500,000 euro.

I have mixed feelings about all this. I consider Kapitulska Ulica my special and private sanctuary. Yet a quarter century after communism, it seems time to heel the wounds and repair the scars. The west and east of Europe will never really be one until this happens.

In late September, there will be another open courtyard on Kapitulska. Should a small, yet dedicated, group of community leaders achieve their vision, music will someday fill the air in this corner of the city. Certainly, during the next event, classical music will be heard in the Albrecht courtyard.

As an American, I always felt communism ended in 1989. The wall fell, people danced in the streets and jiggled their car keys, and everything was right with the world. I was so naive.

Communism will disappear when streets like Kapitulska are repaired. The communists were crummy landlords. Not until their fingerprints have been completely erased will they truly be gone.

Click here: To learn more about, or support, the Albrecht Forum renovation project. 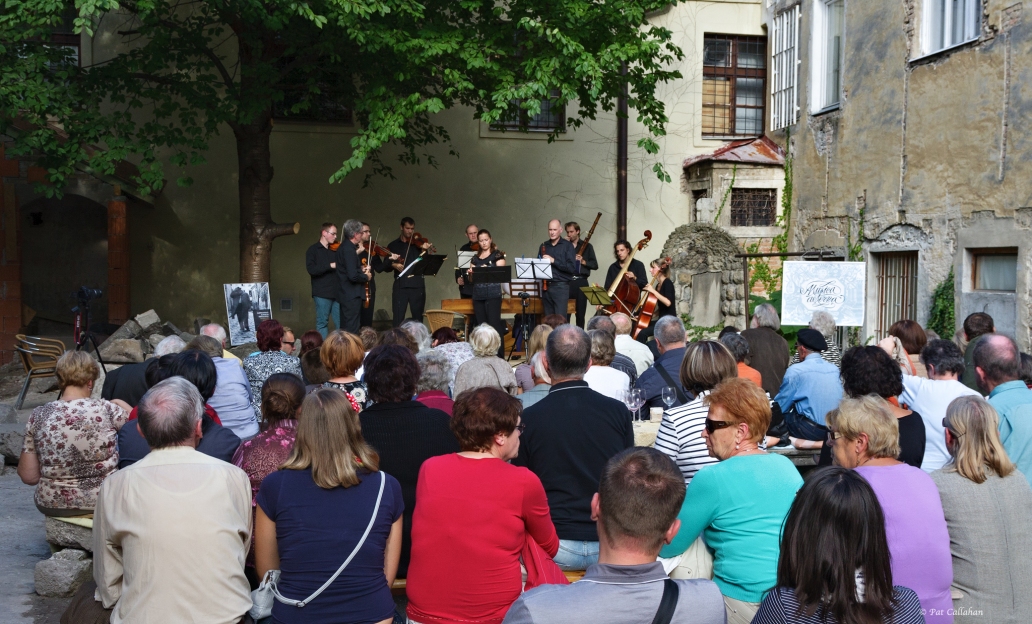 An afternoon of music in the Albrecht House courtyard

This site uses Akismet to reduce spam. Learn how your comment data is processed.